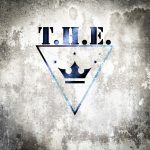 THE Pound Town
Episode 22: Willie Had an Idea

Willie attempts to recreate a Bob Ross painting while Eric and Derrick attempt to distract and punish him for making them go along with such an idiotic idea.