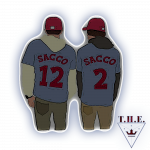 The Jersey Bros get on the mic for the very first time to talk to you about sports as they see it!